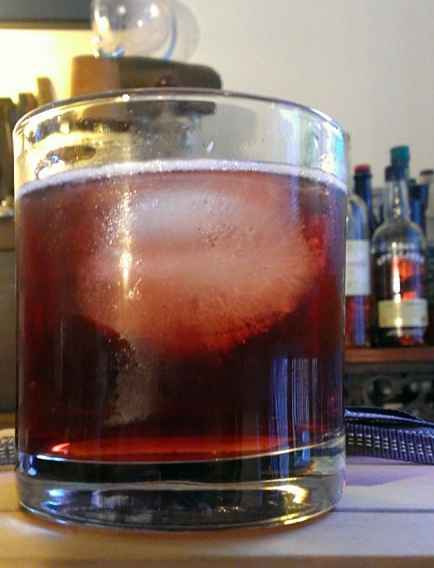 This drink, or at least its bones, has been knocking around in my head since before I launched Experiments From The Bar.  I’ve jotted down or typed out a couple of variations, but never put any of them together, because they just didn’t feel right.  This evening, in an attempt to be a good husband, I gave the living room a good dusting.  I was in the midst of wiping all the bottles from the bar down with a wet rag when I picked up the bottle of crème de cassis and thought tonight’s as good as any to try out the Briarpatch.

The core ingredients have remained the same in all the iterations of the potential recipe: bourbon and crème de cassis.  The other ancillary ingredients, which in the end define the drink, have shifted around.  Bitters, certainly a must, but which?  Something herbal, as well, that seems right.  That last bit ran the range from an absinthe wash, to a dash of crème de menthe, to Amaro.  What about a mixer?  Soda water?  No, that’ll just dilute things down without adding anything.  With no mixer, the crème de cassis might come on too strong.

That gives you some idea of how I end up thinking through a drink recipe, but I’m sure you’re more interested in the final recipe.  In the end, I tackled the herbal and bitters question with a single ingredient, Peychaud’s bitters, which brings some anise and dark fruit notes to the drink without being overpowering.  I did decide a mixer was needed, and my recent infatuation with Fever-Tree saw the addition of their ginger ale.  In the end, the final recipe turned out to be:

All ingredients were combined over a single, large piece of ice and lightly stirred.  This prevents the drink from getting to chilly, which would alter the flavor, particularly of the crème de cassis, losing some of the faint sourness that cordial carries.