It’s the 4th of July, and here’s a cocktail to enjoy on the holiday.  They say there’s nothing more American than apple pie, but what about a cocktail made with one of the spirits enjoyed by the founding fathers, applejack?  This spirit was used to pay road workers during the colonial period in New Jersey, and was a particular favorite of George Washington’s, but is oft neglected these days.  Applejack is nearly identical in taste of apple brandy, or Calvados, an apple brandy made in specific region of France.  Applejack is traditionally different from other brandies made from apple cider, because it is concentrated through freeze distillation rather than evaporation distillation common to most other spirits.  At its most basic, apple cider would be left out in the winter and the water would separate and freeze at the top of the pan or barrel, a process called “jacking” which gives this spirit its name.  This would be scooped out, and the remaining liquid left to go through a number of additional freezes, each one increasing the alcohol content in the remaining cider until you ended up with a distilled spirit.  Not all modern applejacks are distilled through the freezing method, but the results are the same: a sweet, smooth, brandy-like drink.

This noble spirit serves as the base for the Appleseed, whose recipe is as follows:

All ingredients are combined in a mixing glass and stirred without ice, and then poured over ice into an old-fashioned glass and lightly stirred again to chill.

The Appleseed is all about the applejack, the fruit from which it comes.  The amaretto and ginger spice it up, and add a bit of further complexity to the drink, not to mention a bit of extra sweetness.  Fair warning, for those of you that don’t like sweet drinks, this one may not be for you.  If you’d like to have a go at this one, but cut the sweetness a bit, I’d suggest dropping the amaretto portion down to 1/2 part, and potentially upping the applejack to 2.5 or even 3 parts.  Those adjustments will result in a less sweet drink, though you’ll lose some of the background flavors in return for a more pronounced taste of applejack. 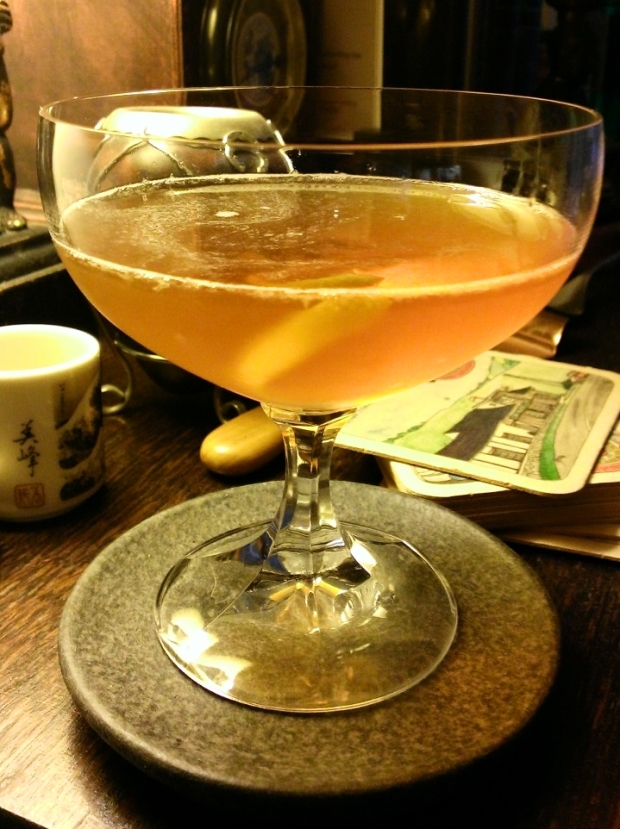 A while back, we had our good friend Grammar Monkey over for dinner and drinks. I came up with this little ditty, and it seemed to go over well.

All ingredients were shaken lightly, and then served up in a coupé glass and finished with a nice big lemon twist.

I really enjoyed the color and surprisingly delicate flavors of this one. I’m a huge fan of brandy cocktails, and I’m always a little sad that I almost never see it used, aside from in the noble Sidecar. Perhaps you will see a series of brandy drinks here soon, and some musings on the spirit itself…

Last weekend, I spent Saturday night with the good people at Waning Gibbous Games for the launch party of their recently Kickstarted game Larceny.  Larceny is a fast paced card game that asks the players to plan the perfect (or at times the most hilarious) heist.  The designer is one of my oldest friends, and my darling wife did the card and box illustration, so I feel pretty tied into this game and I have been lucky enough to see it come into being; from the raw idea being talked about around the game table, to being part of play testing, and all the way up to seeing the final product being boxed up to be shipped to all the loyal backers.

So, amidst stacks of boxes, we gathered at the Waning Gibbous Games headquarters for some much deserved celebration and merry-making (as well as box stuffing so we could get the eagerly awaited games out to the backers).  For the night, I was asked to create a signature drink, and ended up with two recipes that the owner and I decided both met the cut.

The Fix is, at its core, a Manhattan riff.  I wanted to create a drink that captured the feel of the game, and using the Manhattan as a jumping off point just felt right.  I went in a sweeter direction with this cocktail to open it up to a wider audience, but still keep it feeling like a serious business cocktail.  Replacing the rye whiskey of a traditional Manhattan with bourbon started taking the drink in the sweeter direction, and adding amaretto to the mix took it the rest of the way, and made it stand out.  In the end, the recipe turned out as:

The ingredients were shaken briefly with ice and served up, then garnished with a maraschino cherry and a small lemon peel.

A phrase lifted from the 1940’s book, The Big Con: The Story of the Confidence Man, the Thieves’ Blood came from the experiments that eventually resulted in The Fix.  I was playing around with the idea of replacing the vermouth with port, but abandoned that idea in the final recipe of The Fix.  In talking about potential names with the owner of Waning Gibbous Games, he mentioned the phrase “Thieves’ Blood” as how one defines larceny in the aforementioned text.  The name struck me, and I thought back to the port experiment, and played with it until I hit on this surprisingly light, sweet, deep red drink.

All ingredients are combined over ice, topped up with soda water, and stirred.  Garnish with an orange peel to help bring forward some of the spicy flavors of the port and bitters.